High concentrations of river debris overwhelmed 316(b)-compliant intake screens at the East River Generating Station in New York city during severe storms in 2014 and 2015, causing irreparable damage to two recently installed screens. In both cases, it appeared that the surge of debris quickly blocked the 0.6 mm fine mesh screens and the differential rose beyond the maximum design static differential of eight feet, even though the screens were operating at their top speed, the system was unable to clear the rapidly accumulating debris. Within a short period of time, the weight of the material and the force of the water caused the screens to collapse.

Consolidated Edison and screen supplier Atlas-SSI worked together to understand the root cause and to make repairs and modifications to the protective control systems. The objectives were focused on implementing changes and upgrades that would prevent a similar situation from re-occurring and also to enable the plant to remain in compliance with the New York State Department of Environmental Conservation (NYSDEC) State Pollution Discharge Elimination System (SPDES) Permit Programs. NYSDEC is the lead agency that ensures EPA 316(b) regulations are met or exceeded in New York. As part of that effort, they teamed up with the Electric Power Research Institute (EPRI) and Alden Labs to conduct a thorough study of the intake hydraulics, loading to the screens and screen operation—with and without the 0.6 mm fine mesh screen overlays required by the 316(b) regulation.

What they found impacted several design and operational aspects of the plant’s intakes and screens, but also enabled investigators to make a remarkable conclusion.

0.6 mm fine mesh screen overlays were not necessary for the East River Generating Station to comply with entrainment exclusion requirements set by the NYSDEC and EPA 316(b) rule.

Those startling findings enabled the East River Generating Station to be exempted from the requirement for 0.6 mm fine mesh screens and could also potentially impact the way many power plants and utilities throughout the USA can configure and operate water intake screens.

The screens, pumps and other equipment were selected as the best technology available (BAT) following a competitive bidding process that evaluated several alternatives against economic and operational criteria such as cost, reliability, ease of operation and maintenance, energy consumption and others.

Major changes were made to the screen wash system to achieve the low-pressure spray specified by the regulations to gently remove fish from the screens, while also providing sufficient water volume to effectively wash away debris. Atlas-SSI provided larger pumps, valves and spray headers to produce 10 times the water supply to the wash system, increasing it from about 30 gal/min (GPM) to 300 GPM.

A large sluice gate was also installed in a separate intake bay to provide an emergency release mechanism during periods of extremely high differentials. This design provided significant cost savings since it eliminated the need to install release gates in each traveling screen.

And finally, to ensure that the traveling water screens were in compliance with the regulations, 0.6 mm mesh overlays were supplied that would need to be installed during specific seasonal spawning periods. As a result, the fine mesh screen overlays would have to be installed or removed at least twice per year.

To evaluate the performance, operational impact, and the necessity of the fine mesh screens, Con Edison Section Manager Gary Thorn commissioned two studies for the plant.

The first study, supported by EPRI and completed by ASA Analysis & Communications, used computational fluid dynamics (CFD) to model the flow and velocity changes through the screens with and without the fine mesh overlays. The study also attempted to quantify the loading on the screens during the storm events and replicate the differential measurements that had been experienced during the storm events. The results helped engineers and operators make changes to the control systems of the intake hydraulics and identified how the sluice gate operation can be modified to better protect the screens and prevent failures from debris and high water.

The CFD study also looked at the way intake flow may have contributed to microbiologically influenced corrosion (MIC). Close inspection of the damaged screens revealed MIC in the structural components, despite the relatively short service time. The CFD study corroborated that flow patterns may have caused sediment deposits that led to MIC. To ensure the highest level of protection for the new screens, Atlas-SSI applied an advanced epoxy coating to their stainless-steel structural components.

Next the team examined the role of the fine mesh panels in the failures and whether entrained organisms actually suffered 100% mortality, as assumed by the NYSDEC and EPA. A study was set up to determine the survival of entrained fish eggs and larvae through the plants cooling system while simultaneously doing the same study on those that were captured by the 0.6 mm mesh screens. The study configured traveling screens with 0.6 mm screen overlays, while others were equipped with standard 3/8-inch mesh. Collection equipment was also set up at intake, screen wash and discharge points to obtain samples over a period of 25 days.

“The study showed that entrained organisms survive far better than those that experienced collection and release by the fine mesh screen panels,” said Gary Thorn, Section Manager, Con Edison Steam Plant Projects. “The premise that all entrained species die, is far from being true.”

Cooling water travels quickly through the condensers at the East River Generating Station, so the temperature only increases a few degrees Fahrenheit. The tests showed that survival rates at the discharge were higher to those at the intake, confirming that there is little to no effect on egg and larval mortality from entrainment.

“We presented the results of this study to the NYSDEC to get approval to remove the fine mesh screen overlays. They granted the approval and we can now use the 3/8-inch-opening wire mesh panels year-round,” said Thorn.

Larger openings in the mesh also enabled the plant to increase flow through each screen. As a result, only four of the Atlas-SSI screens are needed to handle the plant’s cooling requirements and one screen can remain on standby, providing significant savings in energy costs.

With a goal to further reduce operating costs, Thorn is again working with EPRI, Alden Labs and Atlas-SSI to investigate the impact of intermittent screen operation and variable intake velocities on impingement mortality, screen performance and energy savings.

Atlas-SSI provided a traveling screen, exactly like the ones in use at the East River Station, for a study at Alden Labs to test various operating conditions. While the study is still ongoing, the preliminary results are showing promising results for certain intake velocities and reduced screen operation. The next stage may include on-site testing at other power generating stations.

“EPRI, Con Edison and Atlas-SSI have changed the industry with the screening studies that were conducted at the East River Generating Station and Alden Labs,” said Thorn.

The project has established a best-practices roadmap that shows how collaboration between power utilities, researchers and equipment manufacturers can reduce operational risk to critical screening equipment, while significantly improving survival rates for aquatic organisms.

“It’s important to partner with a manufacturer that understands the requirements, works well collaboratively, has the ability to design, build and install the correct equipment and the flexibility to quickly test and implement improvements into their product,” said Thorn. 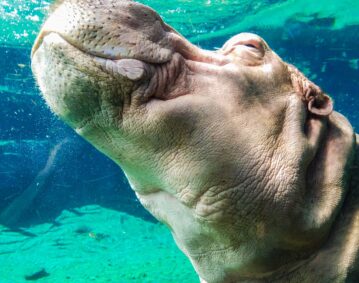 Everyone loves the hippopotamus exhibit at an amusement park or a zoo, especially if they have underwater viewing areas to watch the hippos move around effortlessly in their environment. For the best visitor experience, the water needs to be crystal …

Screen Rebuilt in Nine Days For A Nuclear Power Plant

When a major nuclear power generation facility in the southeast experienced a raw water intake screen failure, they turned to Atlas-SSI to help diagnose and resolve the problem.

EPRI, Con Edison and Atlas-SSI have changed the industry with the screening studies that were conducted at the East River Generating Station and Alden Labs.